When we say “Lucknow” what comes to your mind? The city of  Nawabs, the mouth-watering  Mughlai cuisine-the kebabs, and Biryanis and the beautiful hand embroidered Chikankari dresses.

So let’s check out this beautiful piece of art.

MOTIFS: The source of most design motifs in Chikankari is Mughal, which draws their inspiration from Persian designs. The theme for most of the motifs today is stylized articulations of the Mughal time.

The most common motif used in Lucknowi Chikankari is that of flowers and paisleys that depict the stories of nature. Floral motifs such as rose, lotus, jasmine, and flowering stems, creepers are also block printed on fabrics.

Let us take you to the mesmerizing motifs, which are used to create exquisite designs.

Natural: The themes inspired by nature.

Floral Motif: Floral motifs continue to be an essential part of this embroidery, due to the substantial impact of Persian art.

Palm Leaf motif: The paisley motif is formed along with stalk and leaves. It can be described as the imitation of Paisley motifs.

Let us look at each of these steps in details 3.Washing and finishing:  The embroidered fabric washed to remove the block printed color and other impurities.  it is then starched and dried to obtain stiffness.

4.Additional Embellishments ( if any):

In the recent past, Chikankari has adapted to the new age styles with additional embellishments such as badla work, sequin, mirror, and beadwork that give the fabric a royal, rich look. 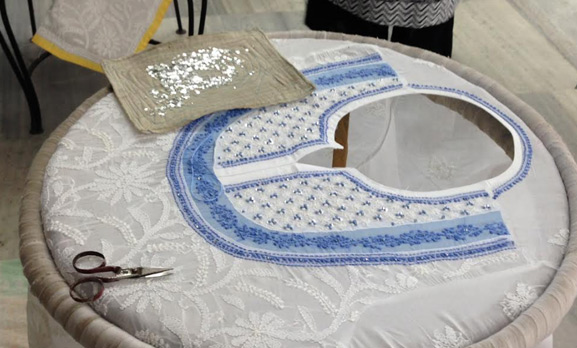 Depending on the type of garment and the pattern to be embroidered the entire process happens in a series of stages over a period of several days or even months.

Chikankari has 3  basic stitches and over 35 derivative stitches used in various combinations based on what the pattern to be embroidered requires.

The three basic type of stitches:

So, the next time you wear a pure chikankari, remember that you would be wearing the Mughal Empress- Nur Jahan’s renovated masterpiece.